In this article we’re going to review the Apex Legends Season 1 and Battle Pass. We’ll look at the different packages, rewards, and what it’s missing.

Apex Legends Season 1 Wild Frontier has finally arrived. A new legend, reward tier system, and lots of adjustments to characters and mechanics. When you first open Apex Legends on your PC, PS4 or Xbox One, you’ll notice that you need to update it. Gigabytes may vary from console to console but on Xbox One the update required 5.39 GB of download.

Related: Will you die if you use Octane’s Stim on Low Health? The first thing you’ll notice when you log into Apex Legends and come to the main menu screen is that they added a background of what appears to be parts of Skulltown, which was voted as a favorite drop location by gamers on the Apex Legends Official Twitter page. Which pass you purchase is up to you. If you’re on a budget, stick with the Battle Pass at 950 Apex Coins which equates to $9.99 USD or roughly $12.99 Canadian. You’ll get 3 exclusive character skins. If you choose to purchase the Battle Pass Bundle at 2,800 Apex Coins, you’ll have to fork out $39.99 USD or roughly $51 Canadian and you’ll jump 25 Battle Pass Levels. You’ll likely not have zero Apex Coins, so by default you’ll be directed to checkout at the $39.99 USD package which is 4350 Apex Coins, the one before that is only 2150. This is a clever way for Respawn to bank on the Season 1 release. In all fairness they do offer an affordable option. See below the Apex Legends Coins in Canadian Dollars: Related: The Wild Frontier Level 110 Badge in Season 1 is Animated

Here Is A Look At All The Reward Tiers

The rewards are not all that exciting which is leaving a lot of bad reviews from gamers online. However, with the short amount of time, this is likely the best Respawn Entertainment could have released. They could have also considered adding two legends instead of one, that would have made things much more interesting because it wouldn’t leave players all fighting to choose Octane. Regardless, here is a look at the tier system: 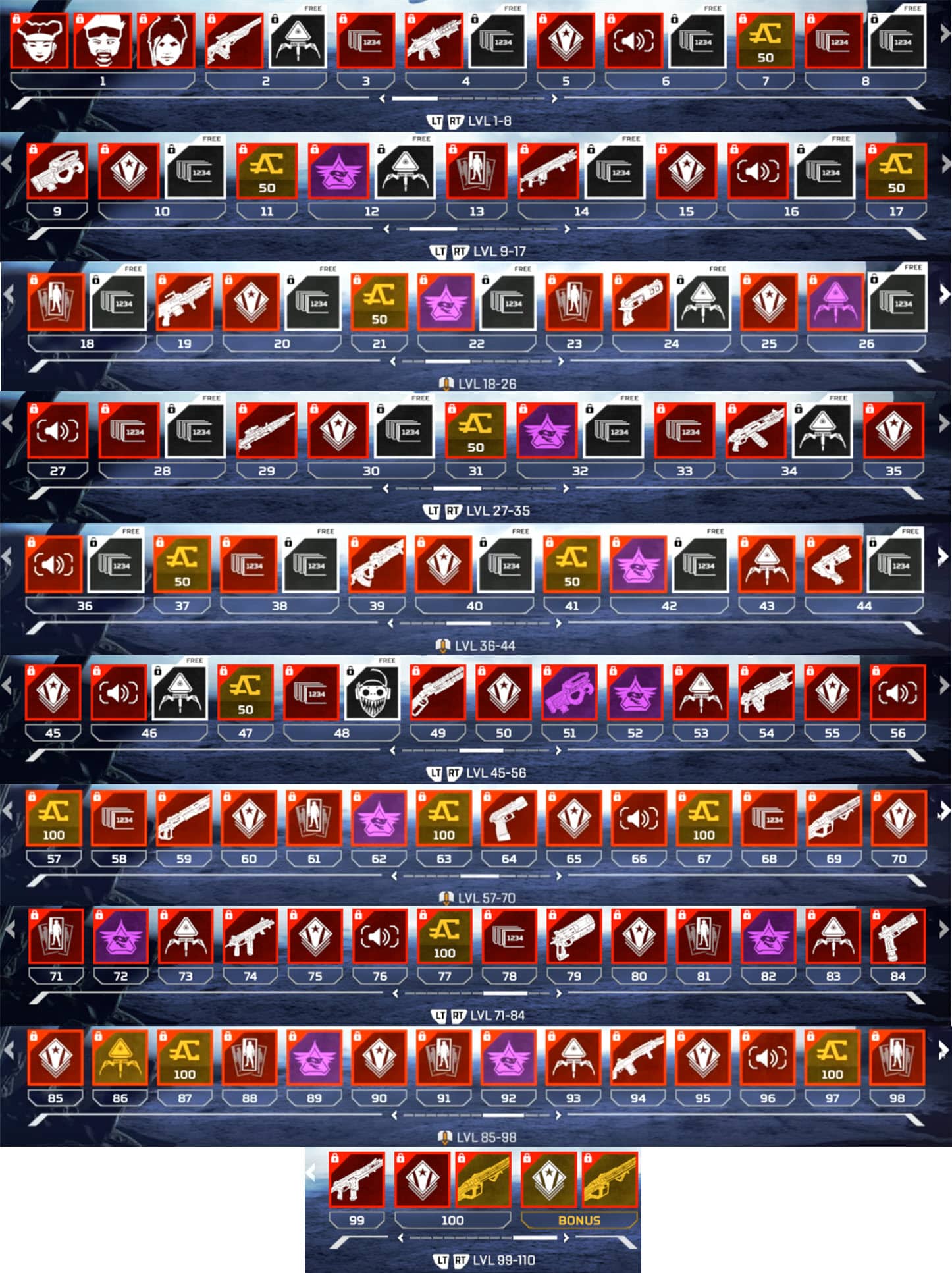 Once you’ve purchased your Battle Pass, as you play games and gain experience points, you’ll unlock the next reward. What you can also do is purchase the next reward at 150 Apex Coins and level up that way. If you’ve purchased the Battle Pass Bundle its  unlocks 25 levels right away. Then, if you wanted to purchase additional levels to max out at level 100, you’ll need to pay 11,100 Apex Coins which comes out to $99.99 USD. What is the Best Way to Use the Octane Launch... Will you die if you use Octane's Stim on Low...
Back to
log in