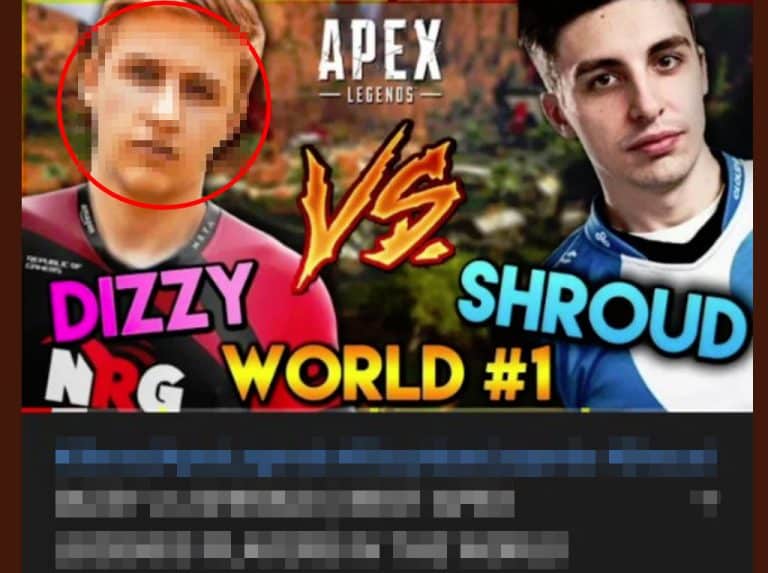 While everyone waits for a Dizzy face reveal, one Youtuber decided to use popular Fortnite streamer Symfuhny as a face cover.

Nrg Dizzy is, without a doubt, one of the most popular Apex Legends players on the planet. His fame has soared since the game’s release in early February. Dizzy’s Twitch followers have grown from 30,000 to over 300,000 in only three weeks. While every Apex Legends fan is aware of the skill he brings to the game, many wonder what the popular streamer actually looks like.

Update March 17: The Dizzy mystery is over as he has finally revealed his face at event in Las Vegas:

His Twitch streams don’t include a webcam and his social media accounts have no images or proof of what the real Coby “Dizzy” Meadows really looks like.

If You Can’t Find Him, Make Him Up

While Youtube is easily regarded as clickbait central, one channel has taken thumbnail creativity to a whole different level. BlizzardWorld uploaded a montage video with its headline being “Dizzy vs Shroud”. The name is perfect, a montage of arguably the two best Apex Legends players in the world. However, the thumbnail image is not Dizzy. The face used for Dizzy is that of Fortnite streamer Mason “Symfuhny” Lanier.

Symfuhny discovered the video and quickly took it to social media:

Dizzy has not replied to Symfuhny’s tweet but the rest of the community seems to be amused. Because of Symfuhny’s easy going personality, we don’t expect for him to take any sort of action to have the video taken down.

On the flip side, Dizzy is a wanted man as the thumbnail clearly shows, if they can’t find a picture of the real Dizzy, they might take another famous streamer to impersonate him.

It will be hard for NRG Dizzy to remain in the shadows for much longer. As his fan base grows, so will the demand for a face reveal. Many streamers hold back on face reveals but eventually give in. At this point Dizzy only has one thing on his mind, and that’s being the best Apex Legends Player in the world.

Nrg has announced that an event will be held in Las Vegas as Dizzy will finally show his face. The event will take place on Saturday March 16th and of course be live streamed for 12 hours. All Live event info can be found here. RUTHLESS: Dota 2 Pros Play Apex Legends At Esports Tournament
Back to
log in