What are the Best Gun Combos in Apex Legends?

Someone new to Apex Legends can be overwhelmed with all the new weapons they pick-up. Sometimes, they don’t even have enough time to use the weapon long enough and figure out if it’s a winner or not before getting killed. Well, this guide will help you determine what are the best gun combos in Apex Legends, and help you start winning games with your squad. The Spitfire is one of the top weapons to use to use in the game. The lack of recoil on this gun, mixed with the number of bullets and damage it causes is a reason why most top gamers love to use this gun in matches such as NRG Dizzy and TSM Viss. The Spitfire is a Light Machine Gun and is a full-auto LMG, which means it’s not a burst. The Spitfire uses Heavy Ammunition which is normally found lying next to where you picked up with Spitfire.

The Spitfire does a lot of damage. Specifically, it causes 180 damage per second (if you’re on target). It also does 20 damage per bullet, so an enemy that does have any armor will be put down in seconds. The damage is dealt different depending on where you’re hitting your enemy. Headshot damage is the most effective, knocking off 40 health, while body shots knock off 20. The lower the bullets go on the body, the lower the damage. Leg shots only do 15 damage. Ideally one should be aiming the crosshairs higher up on the enemy in order to yield the best damage. A basic Spitfire with no attachments can hold up to 35 bullets. Finding “Extended Mags” for light machine guns adds to the number of bullets one can equip. The Spitfire also has attachments of all kinds. Ideally, finding a barrel stabilizer, mixed with extended mags and standard stock will make using the Spitfire a lot easier. There are three grades, being common (grey color), rare (blue color) and epic (purple color). Having Epic equipped for all will give you the best fighting chance to beat any squad and be the leader in your group. Specifically:

The best optic to use for the Spitfire would be the 1x Holo or the 1x-2x Variable Holo. These optics don’t disorient close range gun battles as that will be the majority of fights you encounter. By having an optic such as the 2x-4x Variable AOG, you might over aim your opponent and have a hard time tracking the in close range. It’s best to stay safe with an optic that is good for close range, as well as long-range. The Peacekeeper shotgun is a must when you start a match and can be carried through the entire match if you’re good enough to stay in close quarters, The Peacekeeper has a lethal discharge. It’s Ninja’s favorite gun to use; popular YouTube Fortnite streamer. The reason for this is largely due to how fast you drop your enemy, and seeing that it’s one of the more common guns to find right out of the gates, it will give you a huge advantage than your enemies. 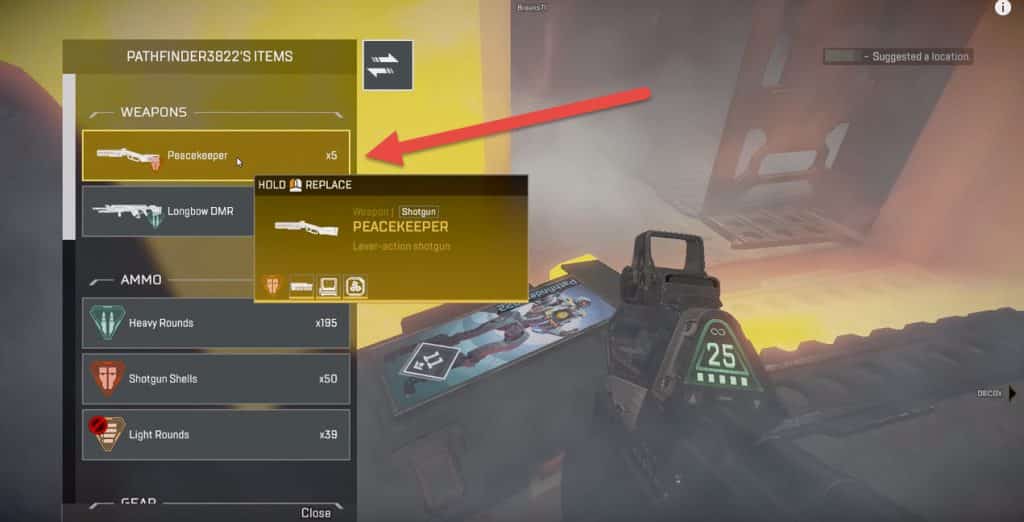 The Peacekeeper is one of the most deadly weapons in Apex Legends, and the fact that you’re able to find it so easily makes it one of the best guns to add to your combination of guns. It uses shotgun bullets which is readily available and found near the shotgun. The Peacekeeper causes 110 damage per second, which is essentially the amount of damage per shot. The downfall is that it takes some time to reload the shotgun. Damage per body shot is 110, however, headshot damage causes 165. If an enemy has no armor, you will be able to knock them down with one shot to the head. The best optic to use for the Peacekeeper would be the 1x Holo. It’s all you need for up-close battles. If the enemies are further away, the 1x Halo will still be able to hit them if you’re pointing at their body. 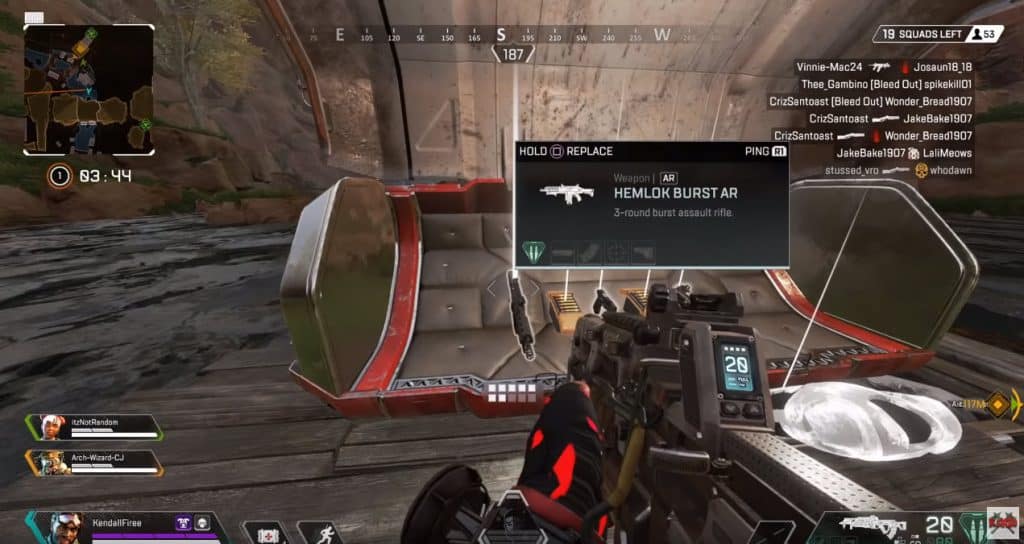 The Apex Legends Hemlock is an underrated gun that is deadly and very helpful early on in matches. The Assault Rifle uses heavy ammo. The weapon that is easily found and the Hemlock is easy to use. It specifically is a “burst” gun and is useful long-distance and even up close. It’s ideal to find a basic optic for the gun which makes it easier for you to shoot down sight. The Apex Legends Hemlock does a great deal of damage. It does 144 damage per second and an 18 damage per shot. The reload time is a little high which requires you to take cover while reloading. Headshot damage is decent, being at 36. Shooting the enemy a couple of times is enough to bring them down, even if they are equipped with Level 1 armor. The Apex Legends Hemlock has the ability to take out 2+ enemies within close quarters (given they don’t have high-level armor). The Hemlock is a lethal weapon and better than the VK-47 Flatline in terms of damage and distribution. A basic Hemlock Assault Rifle with no attachments can hold up to 18 bullets. The Hemlock uses Heavy ammo which is typically found next to the weapon. Finding “Extended Mags” for the Hemlock adds to the amount of bullets one can equip. The Hemlock also has various attachments to make the weapon more efficiency. Ideally, finding extended heavy mags, mixed with a barrel stabilizer and standard stock will make using the Hemlock a lot easier. These attachments below will increase the usability of the Hemlock.

The best optic to use for the Hemlock would be the 1x Digital Threat and 1x-2x Variable Holo. You will be able to add more zoom on the variable halo which is excellent for long-distance battles.

The Spitfire, Peacekeeper, and Hemlock are the best gun combos in Apex Legends as it will give you a better chance in any scenario, especially when it comes down to the final squads of the match. To find them is one part of the journey, but to find additional attachments is where one will significantly improve their chances of beating out other squads.

If you enjoyed What are the Best Gun Combos in Apex Legends? , check Game Life on the GO: Follow us on Twitter @GameLifeHQ Prize Pool For The 2019 Fortnite Winter Royale Will Be...
Back to
log in
We use cookies on our website to give you the most relevant experience by remembering your preferences and repeat visits. By clicking “Accept”, you consent to the use of ALL the cookies.
Do not sell my personal information.
Cookie SettingsAccept
Manage consent