So, What’s The Sitch?

One day of the group stage remains, and although there is still room for upsets, many teams fates are now set in stone. The last placing team of each group are set to get eliminated from the tournament. At the moment, Chaos Esports from group B is confirmed for elimination from the TI9 main event. For the rest of the teams, finishing above 4th is imperative, since that secures you a spot to the upper bracket. Every team lower than that will have to continue the tournament from the lower bracket. As of yet, no team has won TI that started their main event run from the lower bracket, so stakes are high.

Group A has pretty much finalized itself, with only a single series left for each of 5 of it’s teams tomorrow. Team Secret have finally shown signs of weakness and have had their victory run ended by none other than TNC. The demoralizing loss went on to affect their next series versus Minesky, where they went on to draw once again. At the end of the day, Team Secret lost their number 1 spot to PSG.LGD, with a clean 2-0 finish against the European powerhouse. Chaos has still not been able to find their footing this group stage, and are still dead last of their groups. They needed to provide some insane performances to save themselves from elimination, but their 2-0 loss to Keen Gaming was the last nail on the coffin. They are the first team to get eliminated from TI9. Chaos Esports is still a brand new team, and hopefully, they can move on from this loss and take this experience with them to the next season.

Move aside EG, there are new USA representatives in town. Team Newbee seem to have come from nowhere, single-handedly dismantling all their opponents in the last 3 days. Until now, they have only lost a single series to this tournaments favorites, Team Secret, and have been able to draw against LGD. The North American players have all but secured their upper bracket position, unlike Team Liquid, who if not for Chaos Esports, would very likely have been eliminated from the tournament by now. 2 years ago, everyone would have laughed if you told them that Liquid would be struggling to even make lower bracket at TI9. They have fallen a long way down from their own championship caliber, and their TI run is likely going to be a really short one.

If you have half a brain, this is the group that you’re going to watch out for tomorrow. 7 out of the 9 teams have a chance of securing an upper bracket position, meaning the stakes are at an all-time high for the athletes. OG stands strong at the top of their group, with two 2-0 finishes against VP and Fnatic. After such a mediocre season, OG have shown up to this tournament in a surprising fashion, and they are on track to being Dota 2’s first repeat TI Champions. Team NiP are on the cusp of elimination, after a 2-0 loss against RNG today. Although team NiP have incredibly experienced and skilled players, they simply are not able to compete at the level of some of the other teams in their group. It’s sad to say, but this year is not NiP’s year, and with 2 very difficult matches tomorrow, the odds are not in their favor.

Group B is shaping up to be the most devastating groups of any TI. VG, Na’Vi, EG, Fnatic, Infamous, RNG, and VP all have a chance of securing the upper bracket. And they all have just one final chance to prove themselves tomorrow. At this point in the recap, I’d point out a team that has shocked me in their performance or under-performance during the day. However, every single team in this group is evenly matched bar OG and VG. We’ve seen Na’Vi come out swinging, and they’ve somehow put themselves at the third place spot of their group (who saw that one coming?). EG have been able to bounce back from consecutive 2-0 losses and put themselves in the upper bracket with more decisive recent performances. Fnatic, RNG, Infamous, and VP are currently all tied for 5 points, with each given a final chance to set themselves apart from the competition. Do you smell tie-breakers? Because I do! 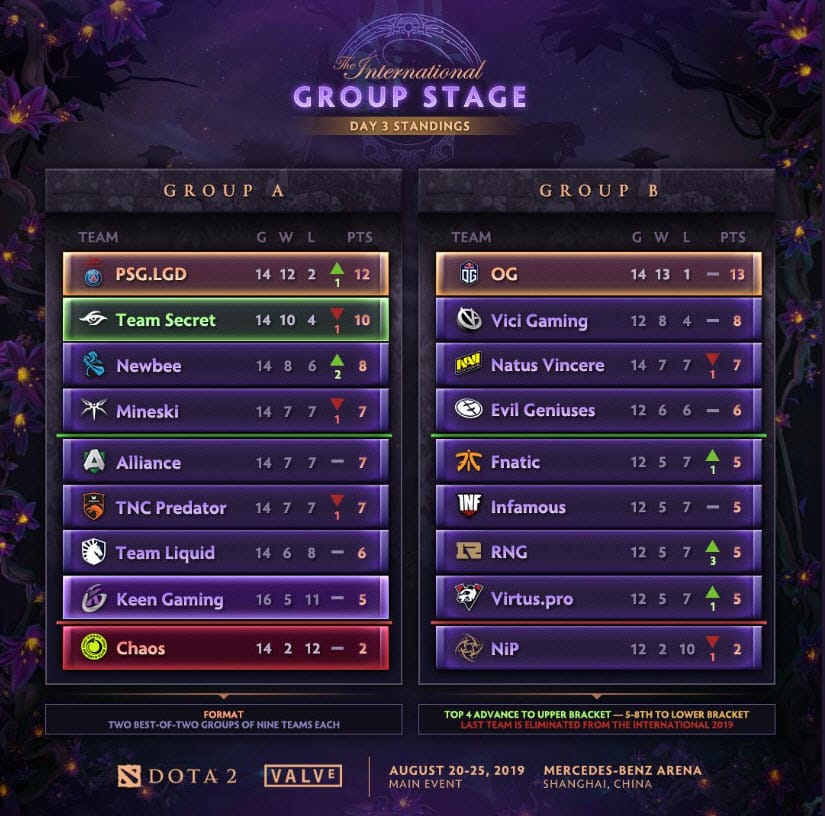 Tomorrow will be the final day of the group stage, and it will house some of the most emotional games you’ll ever see. Teams are on the cusp of elimination, and the upper bracket is just an arms length away. You will not want to miss out on day 4 of The International 9 group stage. But if you do miss it, well then we got you covered! Check back tomorrow to get your TI9 fix, and we’ll tell you all that’s happened, and what to look forward for the TI9 Main Event. Has Overwatch’s Birgitte Become An Unplayable Mess?
Back to
log in
We use cookies on our website to give you the most relevant experience by remembering your preferences and repeat visits. By clicking “Accept”, you consent to the use of ALL the cookies.
Do not sell my personal information.
Cookie SettingsAccept
Manage consent