Fortnite Battle Royale finally has a unique kind of ranked gameplay with the addition of Fortnite Arena Mode.

Fortnite Battle Royale v8.20 update did not include anything ground breaking. Many players are complaining how Epic reverted changes for eliminations and health.

However, there is something that did not make headlines but is a very big deal, Fortnite Arena Mode. Players have been asking for a ranked system for a very long time and finally get what they want.

If you want to unlock the World Cup to test your luck then this article for you.

UPDATE APRIL 2019: If you are an average player trying to reach the Division 7 Champion League, then this article may help you: Tips And Strategies To Reach Fortnite Champion League

We all know that high profile streamers and pros want to compete against better players to test their skills and keep their viewers happy. Of course, no pro wants to compete against bots and stream snipers all day. In return, the same can be said for the casual Fortnite player, who wants to enjoy his time playing, not having to worry about being matched with sweats in every game, getting killed off spawn. Well Arena Mode fixes all of that.

The new Fornite Arena Mode arrives with patch v8.20 and players will finally get matched with the same caliber of players. Unfortunately the new arena mode only offers solo and duo modes as squads have been excluded. Players are able to compete when they want to gain ‘Hype points’ helping them advance to higher Leagues and unlock exclusive tournaments, such as the Fortnite World Cup qualifying.

Each League is broken up into several Divisions, with players working their way from Open League (D1) to Contender League (D4) and finally the Champion League (D7), which has soccer fans loving the name.

If you would like to attempt to qualify for the Fortnite World Cup, your division rank needs to be Champion League. Then, each Saturday a 3 hour block of time will be unlocked for Champion League players. The top 3000 on the Saturday, from each region, will then have their points reset and compete on Sunday to qualify for the World Cup Finals. Full details can be found here.

Fortnite World Cup details are simple. Players need to be in Division 7 Champion League for the event to be unlocked and eligible to participate. 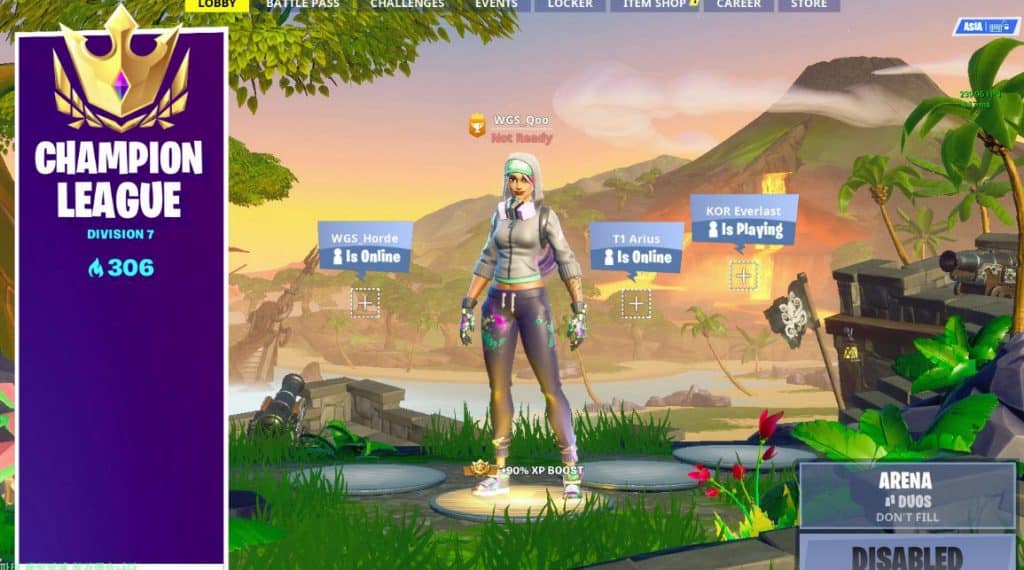 Once at Division 4 level, its -1 point for bus fair. Players who get into games and don’t get many eliminations or reach top 15 will see their progress halt. They call it the contender division for a reason, because pretenders will have a hard time advancing from Division 4.

Matchmaking in Arena is based on players with similar Hype and levels. As a result, players in higher divisions will experience longer than normal wait times before a matchmaking is found. Expect to wait 15-20 minutes in queue once you hit Champion League.

Is Fortnite Arena Mode Right For You?

As we previously mentioned, deciding what game modes to play comes down to a player’s goal. Do you play Fortnite with friends, taking nothing too seriously? Then regular game mode might best suit your style.

Do you like to compete against good players, take your gaming seriously and want to try and make money playing Fortnite? Then hop into arena mode and never turn back.

There are several unanswered questions about Arena Mode, will player ranks reset after every season ?

Of course, over time Epic Games will answer all our questions, but for right now, everyone needs to get used to Arena Mode because this is the future of competitive Fortnite.

Did you enjoy reading Fortnite Arena Mode Coming? Read Game Life on the GO: Follow us on Twitter @GameLifeHQ New Fortnite Explosive Boom Bow Weapon Coming Soon
Back to
log in
We use cookies on our website to give you the most relevant experience by remembering your preferences and repeat visits. By clicking “Accept”, you consent to the use of ALL the cookies.
Do not sell my personal information.
Cookie SettingsAccept
Manage consent