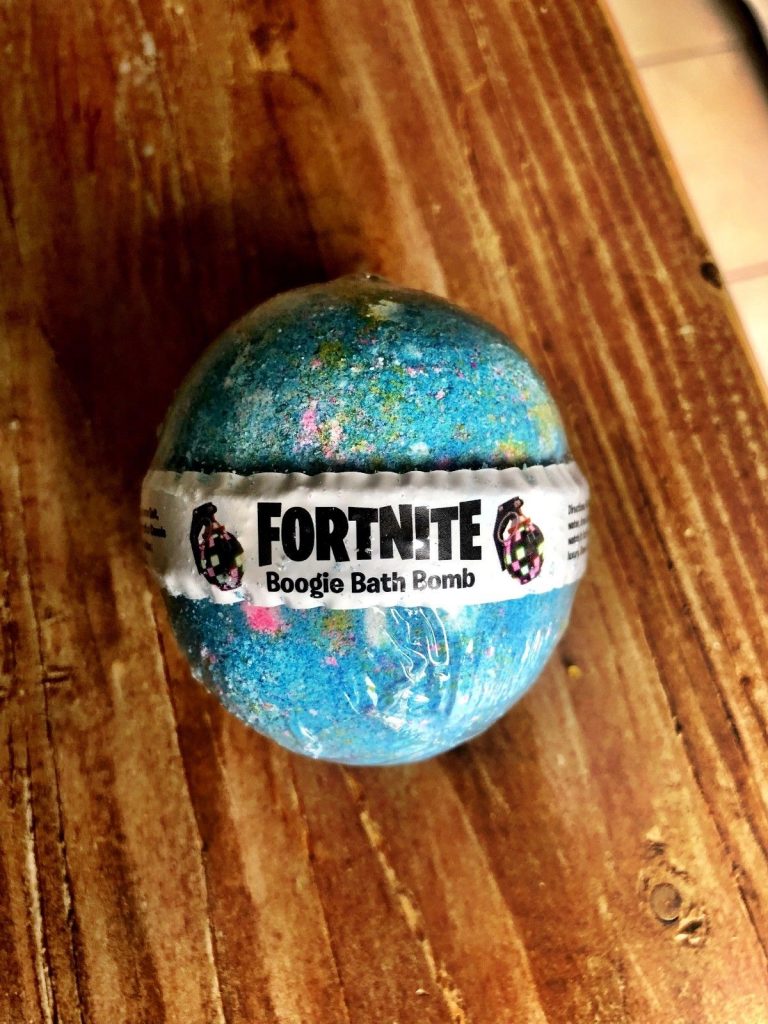 After the success Fortnite BR has received, Game Life has been on the look-out of awesome and rare collectibles. Fortnite Boogie Bomb Bath, Dota 2 Golden Sunglasses and More

Fortnite Battle Royale is a crazy game. And I think the developers are part of the crazy equation as they keep on adding new items, gameplay, map sections in the game that are pretty wild like the shopping cart. On top of the crazy additions is the Fortnite Boogie Bomb Bath! Well little did we know, the last E3 event had these pretty cool Fortnite Boogie Bath Bombs!

I’ve never used or seen one in use, but I’ve seen these bath balls at my girl’s favorite soap shop so I would assume you fill your tub up with warm water and drop the ball inside for an exhilarating experience!

I can just imagine what this Fortnite Boogie Bomb Bath will do once dropped in the tub. Will a disco ball come down when you throw the bomb in the tub? I highly doubt it, but most gamers have a good imagination so nothing’s stopping you from imagining it :).

Zelda Spirit Tracks Rupee Feature Stylus – Pretty cool item from Spirit Tracks. This was only available in Japan.
Mario Kart Luigi Death Stare N64- Nintendo NY World Store – This is a preorder. Price is for EACH shirt. Please include your size with your order. I will issue you a refund should it be out of stock within 24 hours.
Shin Megami Tensei: Digital Devil Story Figures by Toranoana VERY RARE Set of 13 – The Toranoana set, released in 2003, is one of the rarest set of figures from Shin Megami Tensei.
The Toranoana set lot includes the following:
Loose Figures:
1. Pixie
2. Hero and Heroine
3. Cerberus
4. Angel (broken peg connecting foot to base)

Adult Sized Halo Red Spartan Helmet Officially Licensed Costume Mask – This is an officially licensed 2 piece costume helmet/mask from the halo series. It is sized to fit most adults. It has been worn only a few times (Halloween.) Some of the Velcro pieces are a little less sticky than they should be, but any kind of tape will work for holding it together in addition to the Velcro, which makes it more secure and makes it fit better.
POKEMON POSTER NINTENDO RARE EARLY 2000’S GAMES – Seller says: “THIS IS FOR ONE EXTREMELY RARE POKEMON POSTER FROM EARLY 2000’S.THIS WAS FROM A POSTER COMPANY FROM Australia .I OWN A ROCK STORE AND USE TO SELL THESE IN THE MID 2000’S.
Dota 2 Golden Sunglasses TI5 – ne pair of Dota 2 golden sunglasses that were given out to attendees of The International 5 in 2015. These are brand new and are still sealed inside the wrapper they came in.

Good luck! If anyone buys the Fortnite Boogie Bomb Bath, let me know how it goes! Legend of Zelda 8-bit Statue
Back to
log in