After the Fortnite World Cup, Epic Games decided to continue its esports initiative with the Fortnite Champion Series. These tournaments would only feature trios, therefore, it is not as competitive as other Fortnite tournaments that we’ve seen before. However, we have seen a very high number of pro-players compete in the FNCS also. The prize pool is substantial even though it changes from region to region. For example, the European finals winner team will earn $420,000 while Oceania is $60,000. Therefore, we have seen some Fortnite World Cup Finalists compete in this tournament, especially on the high paying zones.

What we can say for sure is that there will be new stars surfacing from these tournaments. Just from the Fortnite World Cup we have seen some new and interesting names in front of much better-known players. Below are the results from the five weeks of the Fortnite Champion Series Season X Qualifiers. Zekimus Prime and xSUNDOWN:

Join @ZekimusPrime and @xSUND0WN as they take us through all of the action from Week 5 in the FNCS Recap. pic.twitter.com/xbBDdXcSNW

Below is the recap for week 5 of the FNCS qualifiers. Make sure to tune in Sept.20 to the 22 as teams battle to be crowned the first-ever season champions. 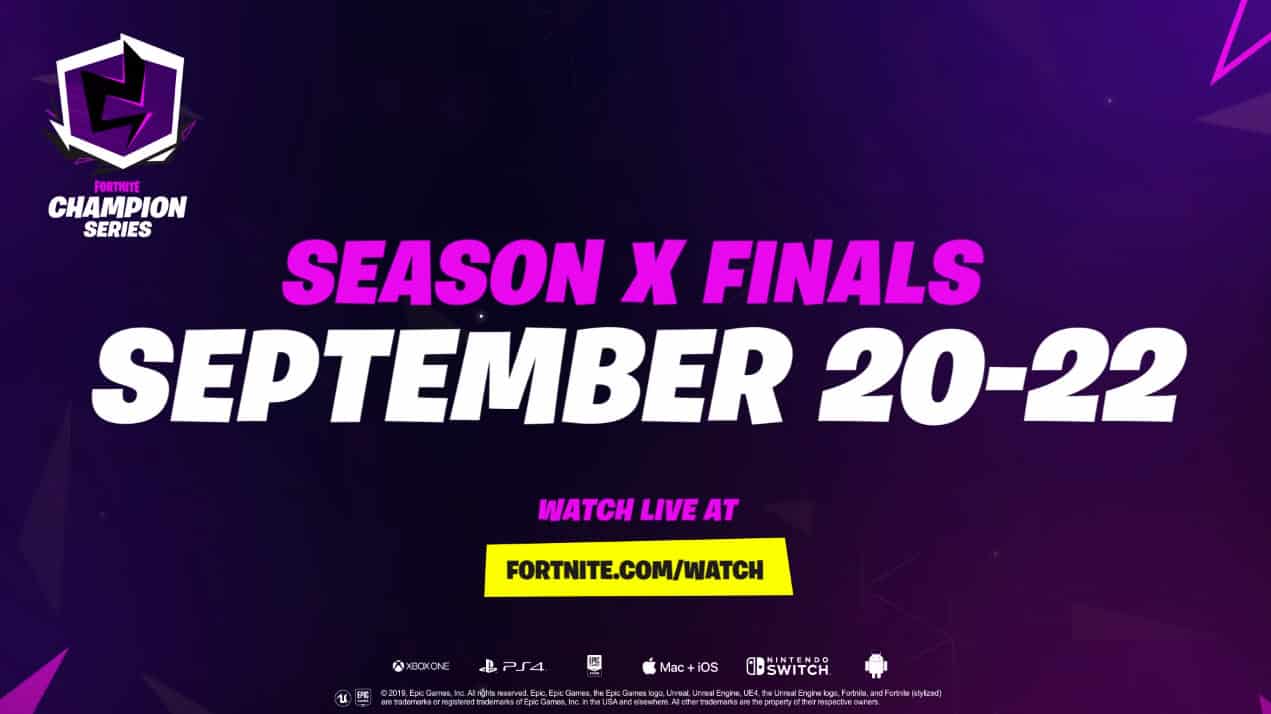 For the second week in a row, and three times during the whole qualifying stage, FaZe Mongraal, Mitro and NRG Benjyfishy claim first. This makes 5 weeks in a row they qualified coming in first or second every week. That makes an average overall placement of 1.4 in the final standings is unorthodox. Given that they have that average, for those following the FCNS would know that the team could have placed 1st every week given that they made some costly mistakes and still finished either 1st or second. The Europe region has the most participants in the qualifiers which makes this duo extremely lethal moving forward considering they faced the most competition.

In a shake-up for NA-East, Tfue, Diuqil Adanahk, and Liquid Fiber placed first. Diuqil Adanahk proved to be the key in this duo giving his teammates the movement and positioning they needed to complete their elims. It’s going to be interesting to see who plays with who in the finals as the trade deadlines approaching.

Another note mentioning is the name changes going on in the qualifiers which is proving to be confusing to some players. In NA-West, rehx, TL Cented, FLY Edgey finished first, however, they had name changes with Mazer Tfue, Mazer Mongraal and Mazer Bugha. This is their 8th first-place finish across all of the cash cups and they’ve won 3 of the 5 FNCS titles. Here are the results for the three popular regions: Week 4 saw some familiar faces in the qualifiers as SEN Bugha and gang look to continue placing in the top 8 of the FNCS. Another familiar group is zyfa alongside NRG Zayt and Ghost Saf, who placed 1st weeks before. Here are the results of week 4 in the competitive Fortnite tournament. FaZe Mongraal and co. have placed 1st place in the FNCS qualifiers for the second time in a row. They are considered one of the best teams in Europe, however, they’ve been filling expectations. Although they have qualified for the FNCS Finals beforehand, they are still looking to solidify their presence in the tournaments.

We’ll look forward to the weekend as Week 5 takes place.

Last week Fortnite esports fans saw some big names qualify for the FNCS finals. Names like Tfue and Cloakzy, Symfuhny, Fortnite World Cup solo winner Bugha and many more. This week we have some new names in week 3 of the FNCS. Here are the teams that qualified for the finals.

Check back for next weeks updates.

Week 2 of the Fortnite Champion Series continued with intense action from some of the best in the world. This week have a new set of top 8 qualifying teams that will move to the Finals. Here are your top 8 teams for week 2 from NA-East, NA-West, and Europe. Stay tuned for next weeks updates.

For the NA West participants, we can see already that there are several known names like the Fortnite World Cup Finalists Arkhram or Falconer. However, amazing performances from Edgey,rehx, and Cented has put the at the top of the leaderboards in week 1 for NA-West. Let us not be too focused on the points they have collected because the points system has changed and now players can earn more points for other objectives than just eliminations.

In week one we have seen Bugha’s team, Sentinels, have a mediocre performance; below expectations after their Fortnite World Cup performance. Also, NA East is much more competitive than NA West. We can see that Clix was able to perform much better in this tournament with his partners Crimz and Spades. Clix had a bad performance at the world cup and looks like he got over that tournament.

The Fortnite Champion Series European front had some interesting first-week winners. Everybody was expecting Mitr0, Mongraal, and Benjyfishy to win the first-week tournament. However, we can see that the Russian players Domentos,let1wk3 and fwexY were able to outperform them. In the Fortnite World Cup finals, we have seen Mongraal and Mitr0 struggle in Solos, but were able to get a top 10 finish in Duos.

The Fortnite Champion Series will continue every weekend until the 22nd of September where the eligible players will compete in the finals. How To Get The Dr Disrespect Sniper Rifle In Borderlands...
Back to
log in
We use cookies on our website to give you the most relevant experience by remembering your preferences and repeat visits. By clicking “Accept”, you consent to the use of ALL the cookies.
Do not sell my personal information.
Cookie SettingsAccept
Manage consent