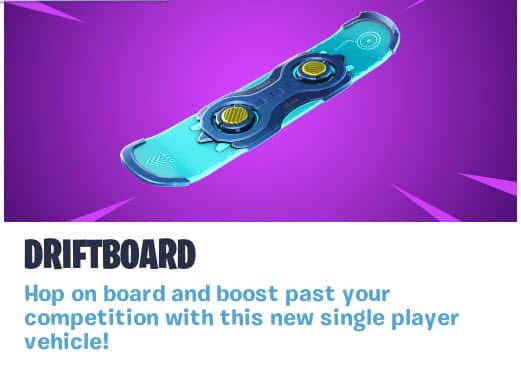 New Fortnite patch 7.10 is set for realease as we welcome the Driftboard and some major bug fixes.

The Infinity Blade was vaulted last week after fans voiced their frustrations regarding the overpowered weapon. Epic Games finally yielded and decided to vault it. However some players having posting a bug where some matches still include the sword. The Infinity Blade destroyed all fun with competitive Fortnite. The sword gives user these overpowered perks:

It caused a big problem during the Winter Royale when players who used it caused havoc in the tournament. Finally, after thousands of tweets and Reddit posts, the sword was vaulted.

We messed up and rolled out the Infinity Blade overpowered / without good counters, especially in the end game.

The Infinity Blade has been Vaulted and we are re-evaluating our approach to Mythic items.

Thanks for calling us out on this!

After it was vaulted most of the players were satisfied, however a bug leaked out today from Reddit user itslabs. A Fortnite community manager said: “Thanks for the ping we are looking into this now.” Apparently, the Reddit user itslabs was right about it.

There seems to be a number of matches were the sword has been sighted. The community manager said that they will develop a fix with tomorrow’s 7.10 update.

We are expecting with the Fortnite v7.10 update that there will be a fix for the shotgun bug and also a nerf to the X-4 Stormwing plane. The new LTM might be coming tomorrow also.

Epic has also released news on a new item, the driftboard, as a single player vehicle. We should Daniil "Zeus" Teslenko will retire in 2019
Back to
log in
We use cookies on our website to give you the most relevant experience by remembering your preferences and repeat visits. By clicking “Accept”, you consent to the use of ALL the cookies.
Do not sell my personal information.
Cookie SettingsAccept
Manage consent