The ice block lodged in the dungeon of the ice castle has been slowly but steadily melting away. Here is what to expect when it’s fully melted.

Polar Peak is by far the main focal point of Fortnite Seaon 7. It was the resting place of infinity blade and also hosted the Ice storm event. However, possibly the biggest secret yet is unfolding in the dungeon of the ice castle. With the ice almost fully melted away, this is what we expect to discover.

Season 7 went live on December 6th 2018, this is what the the Ice Castle looked like on December 19th after glitching down to it:

You can clearly see no ice has formed and cells are unlocked and fully accessible. Here is a complete walk through

By December 28th, the dungeon was a huge block of ice with the outside entrance being completely closed off Only three days later, on January 21st, it becomes clearly visible that something is nested inside the ice block as a corner of a wall becomes displayed Glitching inside the ice block

Only 24 hours later you can clearly tell how fast the ice is melting under the castle. The ice has receded deeper into the stone. 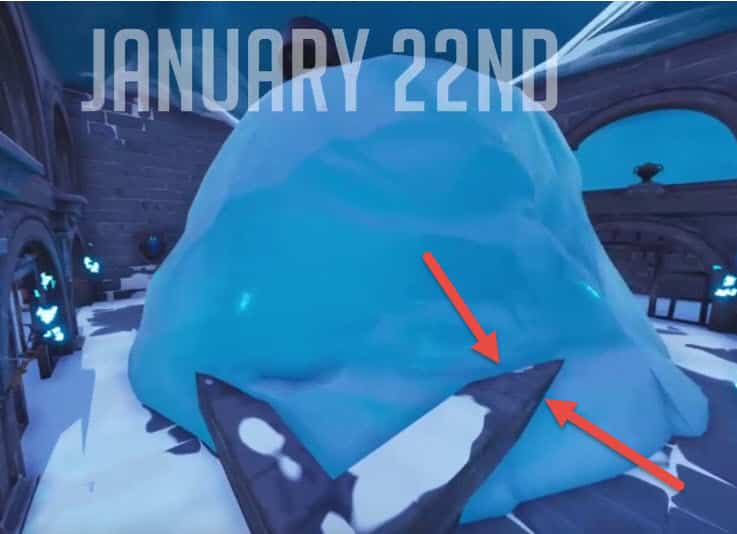 If you take a closer look and enter the ice block, you can clearly see dungeon chains hanging from the top.

The ice is now completely melted. The chain shackles are now exposed while hanging down over some sort of standing stone. Someone was chained to them and is now missing. The main speculation is the Fire King was trapped and an then freed. The freeing of the fire king can signal the end of season 7 with the snow map melting away in preparation for a new Fortnite Season 8 theme. However, before the ice formed under the Ice Castle, the dungeons had eggs in them. A silhouette of a dragon can bee seen inside the eggs. These can also be signs of a dragon or other creature attached to the chains inside the ice.

With over a month remaining until the end of Season 7, there remains many items to be discovered. However, at this point it seems very clear the next major event for Season 7 will unfold under the ice castle and inside the block of ice in the dungeon.

Game Life will keep on top of new events and updates will be posted as they unfold. Credit source FortTory Youtube Fortnite v7.20 Update Breakdown [Update #2]
Back to
log in
We use cookies on our website to give you the most relevant experience by remembering your preferences and repeat visits. By clicking “Accept”, you consent to the use of ALL the cookies.
Do not sell my personal information.
Cookie SettingsAccept
Manage consent