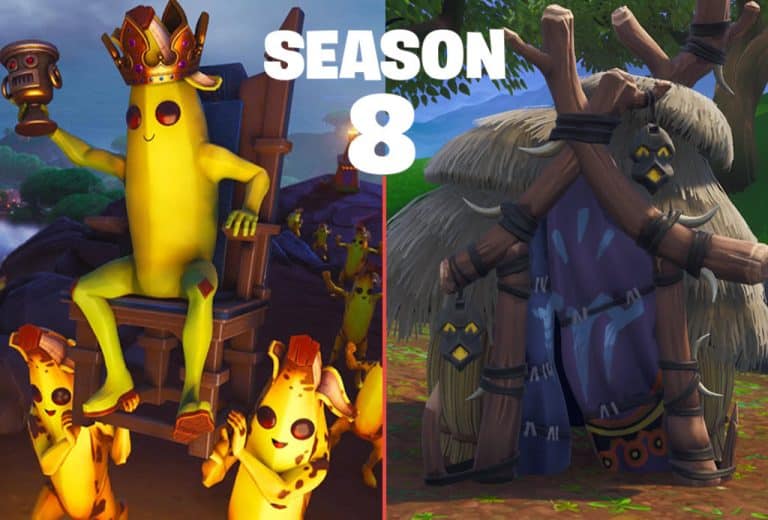 Every new Fortnite season brings the same hype regarding changes to the map and new item additions. The Ice King and Fire King plot was born in Season 7 and it carries into Season 8. As Fortnite fans wait and focus on “Pirates” as the main storyline of Season 8, a new theory might point to a leaked week 4 loading screen.

How the storyline was born

Before moving forward, lets quickly recap how the storyline began. The focus of Season 7 was clearly snow, ice and Christmas. Even Epic’s official Season 7 trailer did not hint of an ice King. However as weeks passed by, mysteries and clues slowly emerged. The Ice King castle and thrown was nested at the top of Polar Peak and a prisoner slowly started melting in its dungeon. As it turns out, as most were not surprised, the prisoner was the actual Fire King.

In previous seasons, storylines never evolved around a character. Season 4 was a meteor, Season 5 had mysterious rifts appearing and disappearing. Season 6 said goodbye to the original Loot Lake as the Vortex was unveiled along with the birth of the CUBE. All the previous events never had a human element factored in. Fast forward to the conclusion of Season 7, the Fire King is revealed and both Ice and Fire kings are carried into Season 8’s storyline.

Although trailers give a glimpse of what to expect, every season carries a twist that is not revealed in any early footage. Season 8’s trailer teases the Fire King, Ice King and Pirate all meeting at a treasure chest. Each group is shocked to see another group show up at the treasure. A war is brewing to claim the treasure, but 2 other groups can easily be added to the mix as new camps, with update v8.10, may unveal hints on what to expect.

As most have noticed, a new tribal camp has been added just north of Sunny Steps. Also, for the first time since its introduction in Season 5, the Vikings are moving off from Viking Village. A new Viking camp can be spotted taking over the first building of Snobby shores.

Remember when tweets were floating around from Epic about explaining Season 8 in one word? Their response was: “Bananas”. The term can be seen as “Crazy” or maybe they were referring to Bananas as the Tribe who will concur the island. A leaked loading screen image for week 4, clearly shows Bananas overtaking and celebrating what seems to be the Volcano. Although loading screens don’t necessarily reflect in game events, it looks like Bananas will play a role in Season 8.

Are these the first signs of Vikings and Tribes slowly invading the map as the Pirates did for the start of Season 8? A crazy theory is that the Ice and Fire Kings try to empower the new groups to join forces. This is far speculations as there seems to be markings of the Ice King imprinted on the tents in the new Tribal Camp. What is the Ice King doing at the other end of the map? All Pathfinder Faces in Apex Legends
Back to
log in
We use cookies on our website to give you the most relevant experience by remembering your preferences and repeat visits. By clicking “Accept”, you consent to the use of ALL the cookies.
Do not sell my personal information.
Cookie SettingsAccept
Manage consent