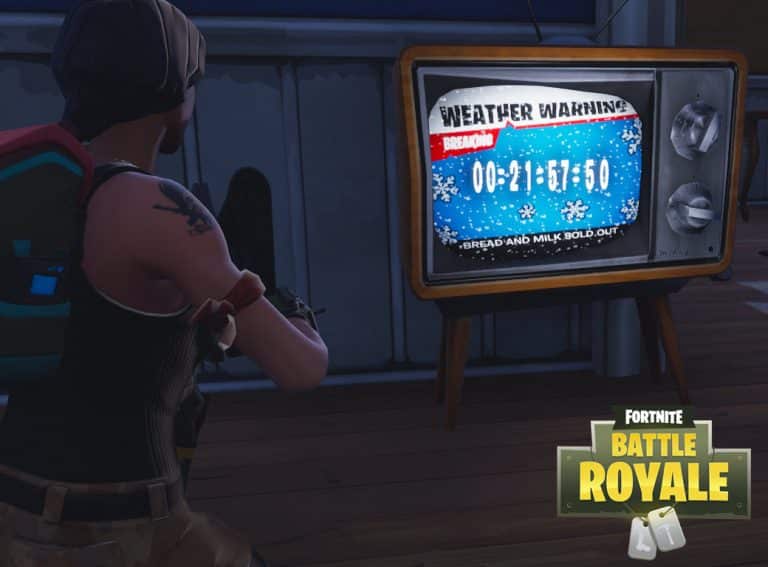 Fortnite Battle Royale is Ice King’s story is heating up. Season 7 has already had many interesting twists with the Ice Biome addition and primal themes. Roughly one-third of the map is covered in ice and snow. As time passes in Season 7, the Polar Peak, where the infamous Infinity Blade was located,  is starting to melt. After the New Year, Fortnite fans were expecting what might happen maybe when the Ice melts away. However, Epic Games had another idea “Fortnite Storm Event”.

TV’s around the map started to show Weather warnings like it would for an incoming storm. The TVs had a timer countdown for 2 days. 24 hours later, storm clouds started to gather around and we noticed the Ice King had a sort of clock around the Sphere. Tv clocks are now counting down in realtime. Most believe the change to expect is the map being entirely covered in snow. Since the 7.20 patch, many non-snow locations are now filled with ice machines in trucks. What time is this happening? Finally: Epic announces Fortnite Secret Skirmish Invitational
Back to
log in
We use cookies on our website to give you the most relevant experience by remembering your preferences and repeat visits. By clicking “Accept”, you consent to the use of ALL the cookies.
Do not sell my personal information.
Cookie SettingsAccept
Manage consent