The Fortnite Battle royale World Cup Solos was the ultimate end to the biggest esports event for Epic Games. This is what Battle Royale is about. The Fortnite World Cup Solos Winner will be crowned as the first World Cup Winner in history, and everyone will remember his name. Two days ago we have seen some amazing moves in the Fortnite World Cup Creative Finals. Yesterday we have seen some great plays in the Duos Final and Aqua and Nyhrox as the winners. However, everyone was looking towards Sunday’s Solos Finals; as if it’s the pinnacle of this entire tournament. Whoever can handle the stress will win $3,000,000 USD which is an outstanding amount because the Fortnite World Cup Finals average age is only 16, and for many of these young players, winning $3 million is unimaginable. Tonight some of these players lifes will change forever. Remember players are competing from all over the World. For some players, earning even the least amount of money can be life-changing.

Before the event, Marshmello kicked things off with a concert. He was at events before, and his skin will available in the game today to celebrate the solos final.

Today we have DrLupo and CourageJd as casters for the event. We have seen some great interviews with the players and seen some interesting insights from the player’s lives. Tfue was among them as well. Tfue was in good spirits.

The tournament format was simple.  Players would earn points depending on their placements. Players who finish:

As well, players will earn 1 point for each elimination. Players who win the Victory Royale will earn 10 points. It is important to say most players will try to get the placement points, thus, several players will be aggressive by nature. However, until storm surge effects them most will play safe early on. The player with the most points at the end of 6 matches will be the winner of the Fortnite World Cup Finals.

The prize pool is extremely high. Here is how the prize distribution looks like: 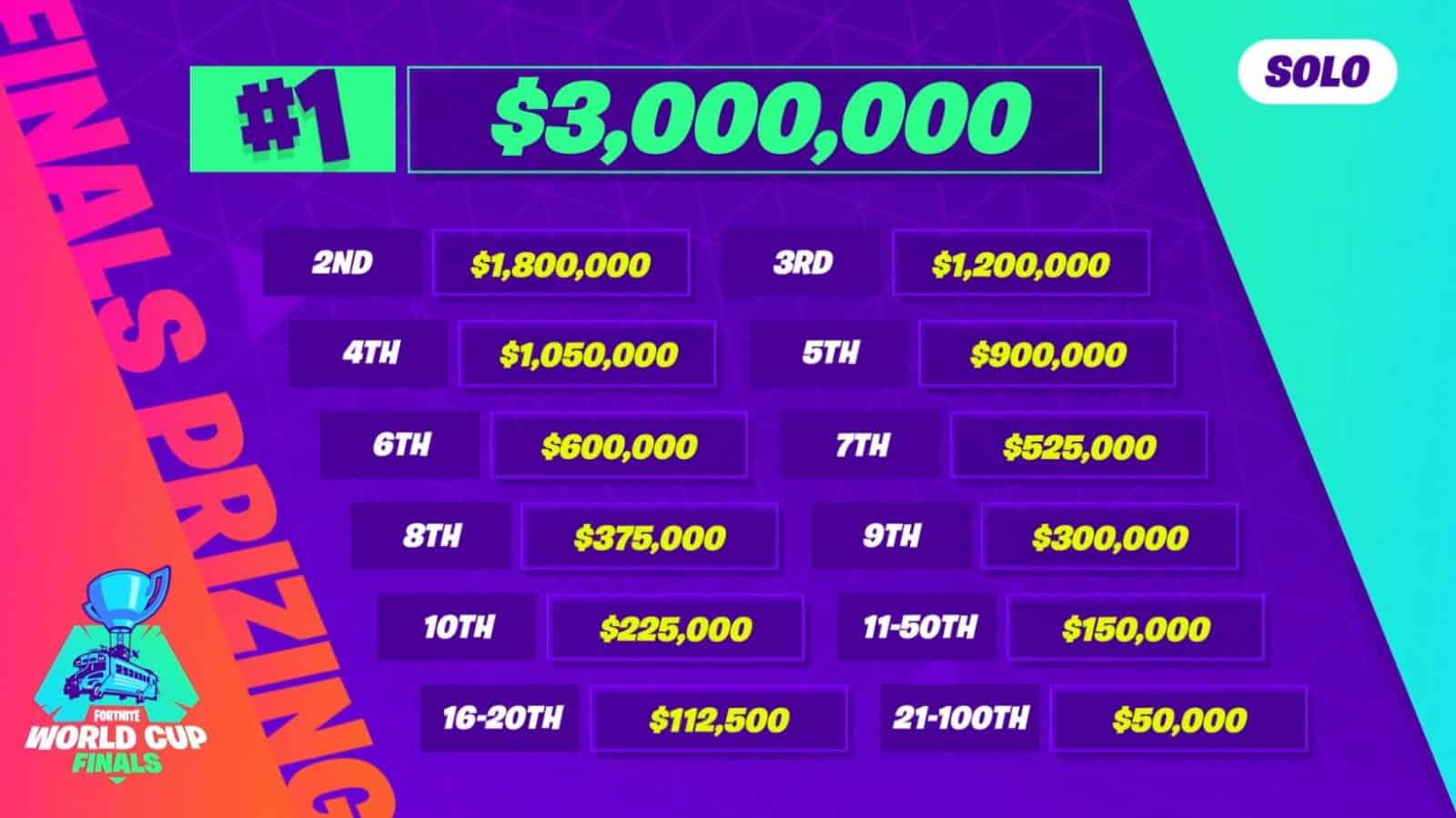 The Fortnite World Cup Solos Final started even slower than usual. The circle was nearly centered to the map, therefore, players were able to easily enter it. The second circle was near the Loot Lake, therefore, 77 players were able to enter it pretty easily. We have seen some amazing plays. However, the most interesting thing was none of the fan favorites were even in the top 10. Remember, this is Fortnite World Cup it’s all fair game.

Tfue did not enter the top 20 as well as MrSavage. Tfue landed to the Block. The only fan favorite that made it to the top 20 was Benjyfishy. KING was able to get 7 eliminations. But the most amazing performance came from Bugha. He was able to do 9 eliminations and get the Victory Royale. Bugha used his shadow bombs very effectively. He picked out his targets easily and showed some great shotgun plays. At the end of the match, he was sitting on the top of the leaderboard with 19 points and a 9 points difference to his closest opponent. Tfue did not have a good first match. He wanted to do better in this match as he landed again to the Block. As we have seen in the first match, fan favorites were not doing very well. This match wasn’t any different as many fan favs dropped early. The first match-winner Bugha also got eliminated very early. But if there was a highlight of the game it was from KING. He was amazing he was able to get 5 eliminations. But the circle was extremely challenging for all the players. The second circle placement was near Happy Hamlet and 1/3 of it was outside of the island. This proved some interesting fights. Many players were not able to rotate to the circle easily. The game ended dramatically when Skite won with only 1 elimination. His opponent was not able to use the high ground and got eliminated from circle damage. We did not see good plays from Tfue, Clix, Bizzle, MrSavage, and Mongraal so far. This game started with a cool shot. KING who was one of the best players so far got eliminated off the spawn. He was gliding near Pressure Plant and got eliminated in the air by Crew. We saw Tfue getting eliminated again around mid-sixties placement. Tfue was definitely not having a good tournament. We have seen Bugha with 2 kills and still holding the first place with 26 points. Letshe made the day of controller players happy with 5 eliminations. Dubs was able to win this time. He was not able to win the 2nd match when he had the high ground advantage but this time he won when he was in the low ground. A Victory Royale and a second-place for Dubs was looking great so far. He was able to get 68 points in the qualifying phase and 48 of his points came from placements. MrSavage got eliminated around mid-twenties. We did not see Bizzle or Clix having a good game either. Honestly, at this point, some of the fan-favorite players are out of the picture for the running.

This match we have seen some action from the fan favs. Tfue was able to get his points. KING who is an extremely aggressive player was able to get several elims as well. Also, Bizzle was able to rack in 4 eliminations. However, the best player in this match was Mongraal. The 14-year-old FaZe Clan member shredded through several important names. He was able to eliminate MrSavage, tfue and Benjyfishy. Although he got himself 7 eliminations he was not able to win and finished 2nd place. The matchwinner was Psalm. He was able to use his high ground against Mongraal. We have seen Bugha getting some eliminations and able to stay on top still after 4 games. He is getting some eliminations and earning placements points every round therefore not letting his opponents pass him. He is sitting with 37 points for now and there is an 8 points difference between Bugha and Psalm. But every player between 11-20 is extremely close to the top 10. We have seen 6 new names entering the top 10 in this match only. For example, Psalm was not around that much but he was able to land on the second place by just winning this match. It is a close affair. Nobody can pick a winner for now. The Fortnite World Cup Finals matches are not disappointing until now, and we have seen some amazing plays after all. This match started much more aggressive. Players at the bottom of the scoreboard are trying to get some points by trying different tactics (more aggressive plays). By the second circle, there were 67 players that were left. Kreo won the match with 5 eliminations. Right now., Top 4 are all consisting of Victory Royale winners. However, there is one player that stands out and one player who is really close to winning, Bugha. He was able to finish the game in 4th place and with 3 eliminations. He is currently sitting 15 points ahead. Which is a huge advantage; if he can manage a point or two in the last match this can be the day where he wins Fortnite World Cup. Mongraal is also trying to push in for at least a top 10 finish still. Tfue got eliminated early on again by Aqua. This is becoming a day to forget for him. The final match was similar to Match 5. Most players started aggressively like Match 5, however, this time there were players who are trying to also protect their lead. Creu won the match with 7 eliminations. Tfue was able to get 3 eliminations and finished the world cup outside of top 20. The game was between Bugha and Psalm. He knew if he can play safe nobody would be able to catch him. He had a 15 points lead prior to this match and it paid. Unlucky for Mongraal; he was not able to make it to the top 10 and got eliminated around 19th place. Bugha was able to win the Fortnite World Cup in solos with an amazing performance. He was able to qualify for the World Cup in Week 1, and in the end, lived up to his tag. Except for 1 game, he was able to play consistently, much better than the rest of the lobby by far. He managed to get 59 points nearly doubling Psalm’s 33.

It was a great competition in Solos for the NA. They were able to secure top 4 spots. EU on the other did not do that well. MrSavage did not have a good tournament at all. Benjyfishy, Bizzle, and Clix are among the players who also will try to forget this tournament.

But Congratulations to Bugha. What an amazing performance that was. Ninja Makes A Promise For The Next Fortnite World Cup Ewok Becomes First Female Player To Join FaZe Clan
Back to
log in
We use cookies on our website to give you the most relevant experience by remembering your preferences and repeat visits. By clicking “Accept”, you consent to the use of ALL the cookies.
Do not sell my personal information.
Cookie SettingsAccept
Manage consent