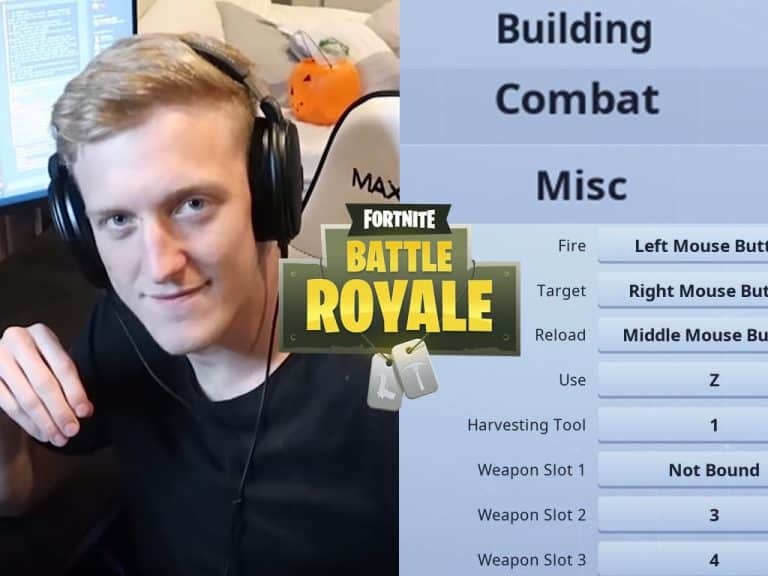 Epic is known to keep changing the layout of the input menu in Fortnite. Although bindings should not be affected with updates, it can be a pesky task to find exactly what items have been moved around. Tfue does not usually make any major changes, but for players who use his bindings, its good to keep up to date and get a visual of what they look like when menus change.

Before getting into Tfue’s bindings, the big talk is how Tfue has recently mentioned that he will be switching to stretched res ahead of the Fortnite World Cup. This was very short-lived as he has mentioned on stream he is reverting back to his native settings. Although he did use the stretch during some streams, he is back to his standard settings.

The biggest change with the input settings is the new categories. Prior to the new update, all binding were bundled under one menu. Things are now broken into sub-menus. Movement, Combat, Building and misc are the major categories. Even Tfue was confused on why the Building Edit bind falls under the Misc menu instead of the Building menu. The rest of the menus are much cleaner and the changes make perfect sense because of the number of vehicles now added to the game. Here is an updated look at Tfue’s keybinds with the new menus.

The new menu order does not change from the previous layout:

The building menu has the same organization order, however, the Building Edit is now found under the Misc menu:

The addition of the Misc menu is a nice feature. Should new bindings come and go, they can be classed under this menu:

Here is an updated video flyby of Tfue’s sensitivity settings.

Although the orders have not changed, having menus certainly keeps things organized. Nothing major changes with Tfue’s bindings but its always good to get an exact visual for players who tend to use his exact settings. Dr Disrespect Loves Synthwave. Sings to FM-84 "Goodbye".
Back to
log in
We use cookies on our website to give you the most relevant experience by remembering your preferences and repeat visits. By clicking “Accept”, you consent to the use of ALL the cookies.
Do not sell my personal information.
Cookie SettingsAccept
Manage consent