Konami will be releasing eight Castlevania classics on May 16th for the PS4. Find out which games will be included.

Which Castlevania games will be in the Anniversary Collection?

These eight titles will be digital exclusives at the PlayStation Store on May 16th. 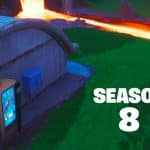 Vending Machine Locations Fortnite Season 8
Back to
log in
We use cookies on our website to give you the most relevant experience by remembering your preferences and repeat visits. By clicking “Accept”, you consent to the use of ALL the cookies.
Do not sell my personal information.
Cookie SettingsAccept
Manage consent