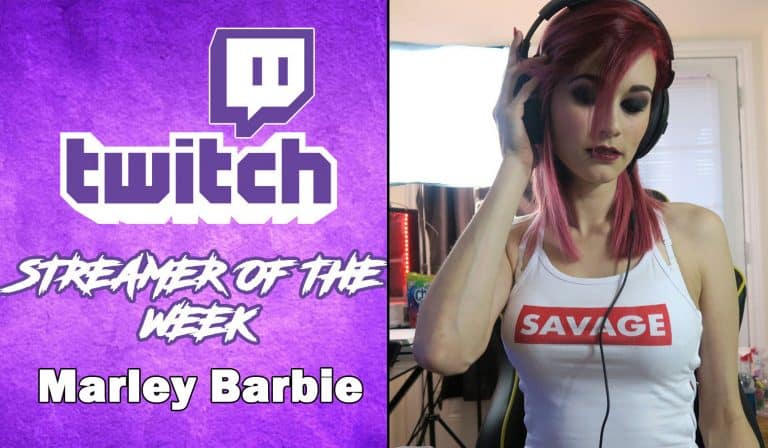 This week we look at the multitalented streamer Marley Barbie. She is everyone’s favorite Call of Duty girl, and she is also Game Life’s streamer of the week!

The streaming world is not for the faint of heart. Jumping into this space requires resilience and most importantly, dedication. Almost everyone who has become successful on streaming platforms didn’t get famous overnight. It took many years for these streamers to get noticed; either through their personality or their skill. Of course, there are exceptions; right place/right time kind of thing. One thing can be said as well, it’s not what you know but who you know which definitely applies here. If you happen to be well connected then you’ll have an easier time to get noticed.

In the end, the same saying goes on; hard work pays off. In this week’s streamer of the week (SOTW) we are featuring, Marley Barbie, who is one of those streamers who has been grinding for years. She has amassed a large following on her social media channels, including Twitch where she has 130k followers.

Last week we featured Aceu who plays Apex Legends. This time around, we’re changing games again and moving onto Call of Duty, specifically Black Ops 4 Blackout. For those in the streaming world, most have an understanding that gaining followers might be a little easier if they play Fortnite. Since Business Insider noted that Fortnite has more than 250 million registered accounts back in 2018, it goes without saying that Fortnite has one of the biggest viewerships on any platform. Games from Call of Duty tend to have low viewership unless there’s a major event (ex: esports). So it can be hard to get the awareness to grow. But persistence can pay off.

Who is Marley Barbie?

Marley Barbie (aka Kelli) is a full-time Canadian streamer for Team Pwnage, which is a community of non-competitive gamers and streamers. She’s been on Twitch for around 5 years, which shows how dedicated she is streaming. She’s also had previous names which you might know her by (Chick6ix and Pwndbyachick69). One of the great things about Marley Barbie is that she’s very engaged with her chat. She shares some deep thoughts and isn’t afraid to say what’s on her mind, which is one of many reasons why people love watching her stream.

She’s also very active on her social media channels and incredibly appreciative for any support she gets.

What has helped Marley Barbie gain more followers day by day is the fact that she’s engaging with her fans. It rare when she doesn’t reply on Twitter, and when she’s on Twitch she tries to tackle as many questions as she can.

Marley Barbie plays Call of Duty Black Ops 4 Blackout primarily. She’s touched Fortnite a few times and played other games like Rainbow Six and Battlefield, but her true love is with CoD, and her game is impressive. Here’s a montage of her playing Blackout.

Personal Side: Only Fans and Patreon

On top of Marley’s daily grind on Blackout, she also does other things than just streaming on Twitch. Marley has created an exclusive membership club for her diehard fans at OnlyFans.com as well as a Patreon page. She’s photogenic and likes to take poses and selfies to fill her Instagram page. But if followers want to see a more personal side of Marley, they can subscribe to either Only Fans and Patreon and receive photos of her in cosplay and lingerie. Marley is very confident with herself which is why she’s able to take the time to do these type of photoshoots.

One of the reasons she offers these subscriptions is to do more professional photos, as she puts it on her Patreon page:

“I’d like to start taking more “professional” photos in a real studio with a trained photographer and reaching this goal will allow me to start doing that!”

In addition to Twitch, Marley has set up shop on many social platforms. On her YouTube channel, she posts montages of some of the best kills and action in Call of Duty Blackout. On her Twitter page, she likes to engage with fans and tweet some personal stuff like her new ear piercings. Marley’s Instagram is more of her taking selfies and cosplays; giving followers a preview of what they can expect if they join her exclusive clubs above. If you’re interested in catching one of Marley Barbie’s Twitch streams, or you want to follow her on Twitter/Instagram/Youtube, check out the links below. Click any of the URL’s to go to Marley’s page: Where to Watch The CWL Championship - Call of Duty...
Back to
log in
We use cookies on our website to give you the most relevant experience by remembering your preferences and repeat visits. By clicking “Accept”, you consent to the use of ALL the cookies.
Do not sell my personal information.
Cookie SettingsAccept
Manage consent